Hey, folks! One of the reasons I haven't been blogging much over the past few years is that I have gotten back into Dungeons & Dragons in a big and time-consuming way. D&D and I go way, way back (I still have my original pink box Basic Set including the dice!) and it's been so great to get back to having epic adventures with my friends. I am a big fan of Fifth Edition, and so it's with great excitement that I picked up the new D&D Essentials Kit. I did some unboxing photos and quick hot takes on it for the small D&D-themed Slack group I'm in, and one of my friends there convinced me that I should blog it all, so without further ado, let's take a look!

First off, the box art is just gorgeous: 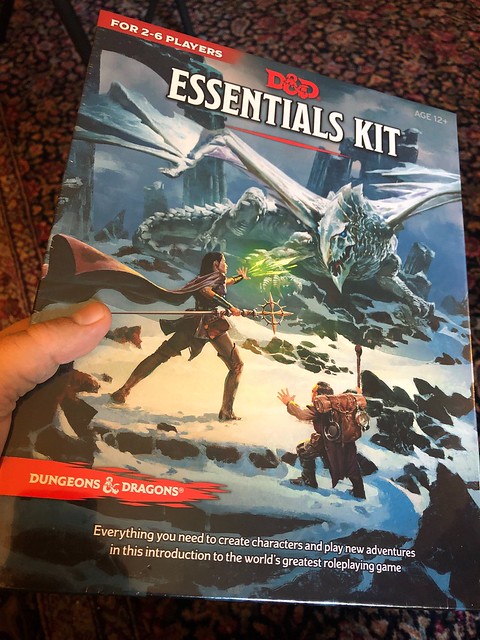 It's also notably heavier than the Starter Set that was released back in 2014. We'll find out why in a moment!

Notice also the "for 2-6 players" blurb; we'll come back to that too.

No D&D box set would be complete without dice! 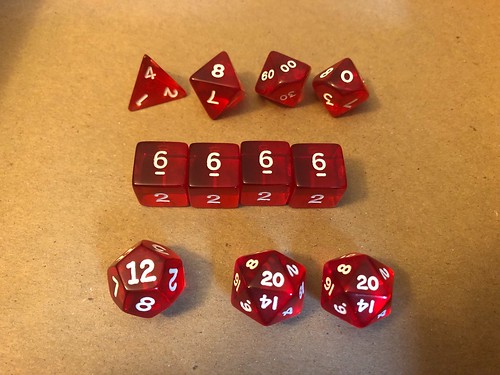 These are a radical departure from the blue pearlescent dice that shipped with the Starter Kit, practically their opposite by being both red and translucent. A close inspection revealed no air bubbles or obvious flaws, and my handful of test rolls with the d20s seemed pretty reasonable. Also this is the first time that I've seen a D&D box ship with more than one of each die; included here are a second d10 for percentile rolls, a second d20 for rolling with advantage/disadvantage, and 4d6, presumably to ease character creation (thought it's also half a fireball). This seems like a nice nod to products like the Dice of Rolling where the mix of dice is tuned to the most common dice rolling situations. It's not quite as good as the DoR, but I commend the move nonetheless.

After the dice, we have the brand-new adventure book, Dragon of Icespire Peak, 64 pages of squarebound awesomeness: 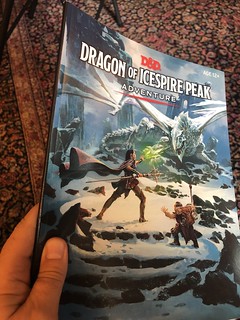 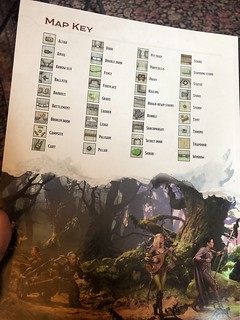 Speaking of the dragon, it's roaming! Any time the party arrives at a location, the DM rolls to pick where the dragon is at that point... it might be at the same location that the party is visiting! It also has a specific lair, separate from any of the other quest locations. I really, really like this mechanic, as it adds an extra dimension of chance and danger as it may result in early and multiple encounters with the fearsome beast, which in turn will make its defeat all the more satisfying.

The individual quests are roughly two to four pages each, and are presented alphabetically by title rather than sequenced by level or plot threading. This seems like a reasonable decision to me; I think it may result in overall faster lookups by the DM.

There's new art throughout the adventure, and like all the 5E art, it's great. I will always have affection for the art in the Basic Set and in the 1E books, but we are well and truly spoiled by the production value on display in the 5E items.

As with Lost Mine of Phandelver, all the monster stat blocks that you need for the adventure are included here.

Beneath the adventure book are several perforated sheets of cards that serve various purposes; I appreciate that they're printed on some nice card stock. The first two we'll look at are the Initiative Cards and Quest Cards: 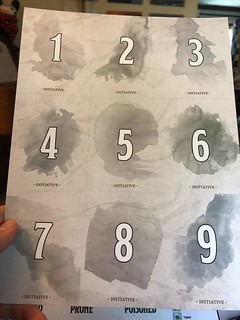 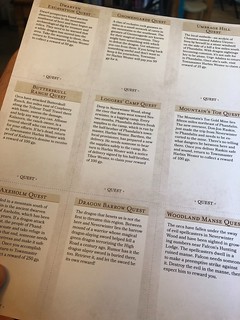 It looks like the purpose of the Initiative Cards is to hand these to players once the turn order has been established, thereby helping everyone remember what order they are supposed to act in. I'm not entirely sold on this concept, but it seems like it could be useful for helping new players to ease into the game.

The Quest Cards record the name of the quest, the purpose, the questgiver, and the reward. Again, I think the idea here is to hand these to the players when they accept a quest, and then they hang onto them until the quest is complete, so that they'll remember the important facts about what they've signed up for. While this is a bit "game-y", sort of like picking up Route Cards in Ticket to Ride, I think this is a great idea, especially for new and younger players. Heck, I think the campaigns I play in could benefit from something like this!

Next are the Condition Cards and Combat Cards: 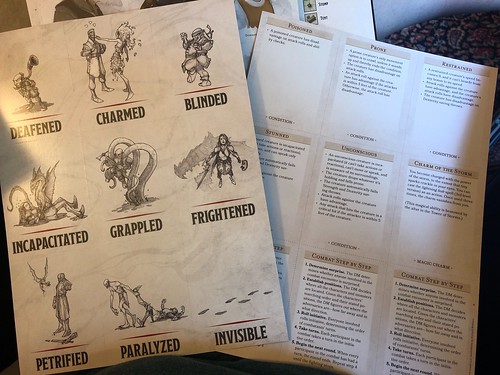 The Condition Cards feature art on one side and document the game mechanics of the condition on the other side. They're a nice quick reference for what it means to be Charmed or Grappled or whatever, and the DM can again hand one of these to a player when they're affected by a particular condition. I love this and can see it being a great way for players to remember what's in effect during gameplay. The only downside is that there's only one of each condition, so if multiple players get knocked Prone at the same time they'll have to share a card.

The Combat Cards are a quick reference to how a combat encounter works, at a high level, that I can again see as beneficial to new players. It's nice that three are included here.

Next we find the Sidekick Cards, which I adore: 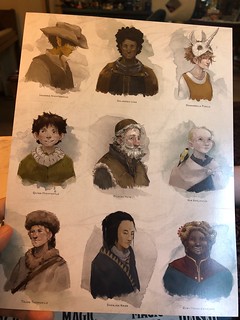 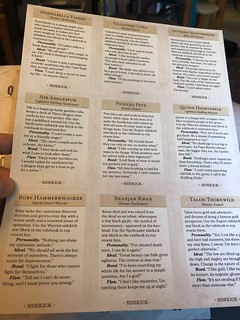 Remember how the box said you only need two players? Sidekicks are simplified NPCs that can join the party; they're meant to enable one-on-one play by bolstering a solo player without having to be as complicated as playing multiple characters, with a limited set of abilities so that they are helpful but don't overshadow the player character(s). The player(s) and DM can decide whether the player(s) or DM will control the sidekick. The front of the card shows a portrait of the sidekick (the art here is really charming, and there are some great names--my favorites are Ruby Hammerwhacker and Donnabella Fiasco!), while the back gives some highlights of their personality and indicates which of a handful of stat blocks to use for the sidekick. This is such a great idea and I can't wait to try it out in actual gameplay.

Finally there are several sheets of Magic Item Cards: 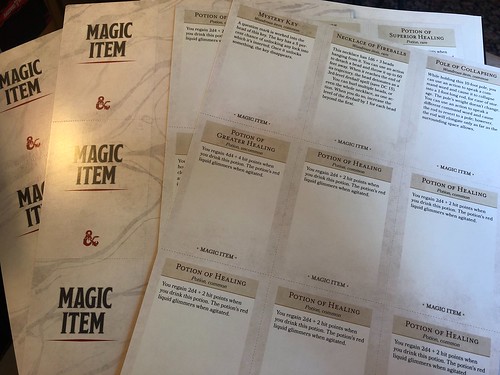 Again, this is a great feature for newer players. When the player finds an item, just hand them the card, and it has everything they need to know about what it is and how it works. If they want to give it to another party member, they just hand the card over, with no tedious pencil scratching or erasing involved. The groups I've played in lately have embraced various forms of private electronic messaging (mainly Slack) for communicating this kind of info, but for younger players or uneven mixes of technology, this is perfect.

Once you separate all the cards, you'll want somewhere to keep them; the Essentials Kit thoughtfully includes a little box for you to store them in! Just fold it up and off you go: 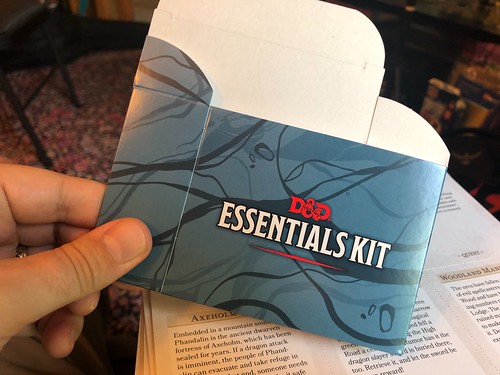 Another big win for the Essentials Kit is the large, player-friendly map that's included: 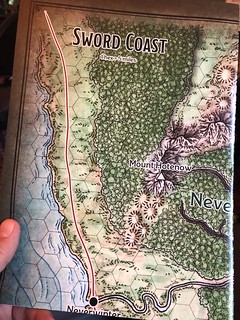 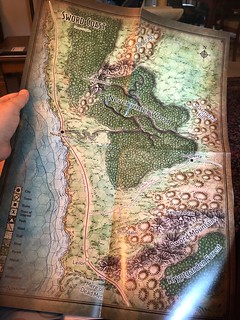 The Sword Coast area is depicted on one side, absent all spoilers so that quest locations can be properly discovered, with a map of the town of Phandalin on the reverse: 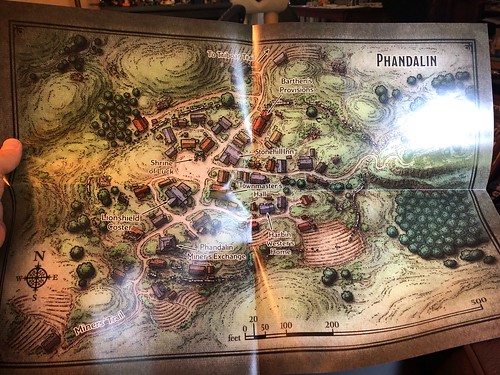 After the map comes the Rulebook, another 64-page squarebound tome: 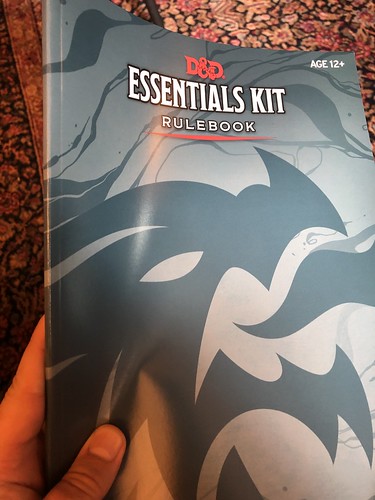 The major addition here that wasn't included in the original Starter Set are rules for character creation! A core set of races and classes, with a couple of archetypes for each class, are included: 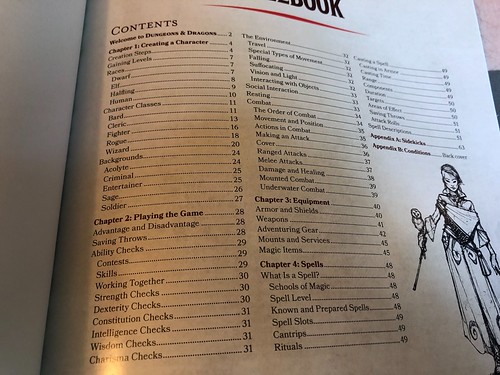 While monster stat blocks are in the adventure, the rulebook has all the equipment, magic items, and spell info.

Sidekick rules are short and sweet, amounting to two pages at the very end of the rulebook, including the handful of stat blocks and guidance on levelling them up if they stick around/live long enough.

Another addition to this set is a DM screen with brand-new art! 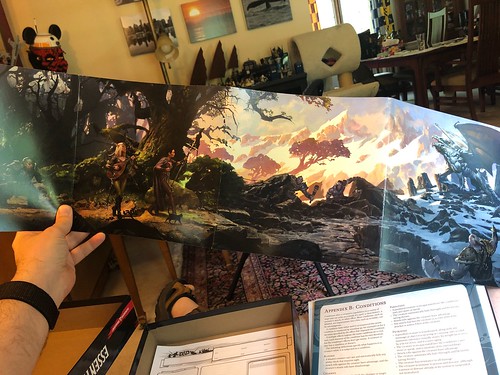 At a quick glance, the DM-side content appears to be the same as what's on the "Reincarnated" DM screen, though I think with a slightly different layout: 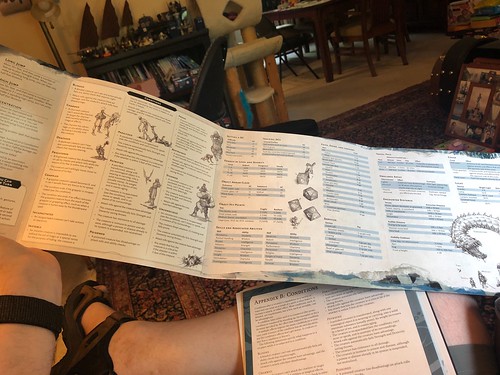 It's printed on a heavy card stock, but is kind of flimsy compared to the existing screens; mine appears to have been slightly bent at some point during the production/packing process. The player-side art is great though!

The box includes six blank character sheets printed on heavy paper stock which should hold up well to lots of pencil and eraser love: 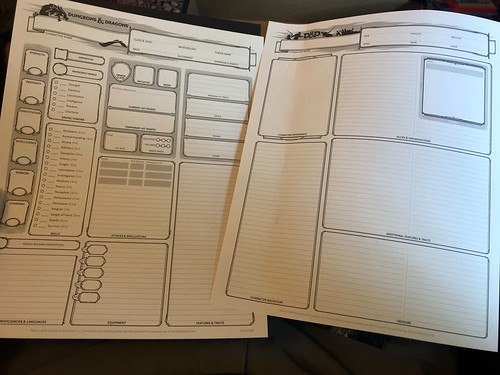 I really like the extra space for "additional features & traits" too.

Last but not least, there's an advert inviting us to buy more stuff! Don't throw this out though--on the back are unique coupon codes for D&D Beyond!! 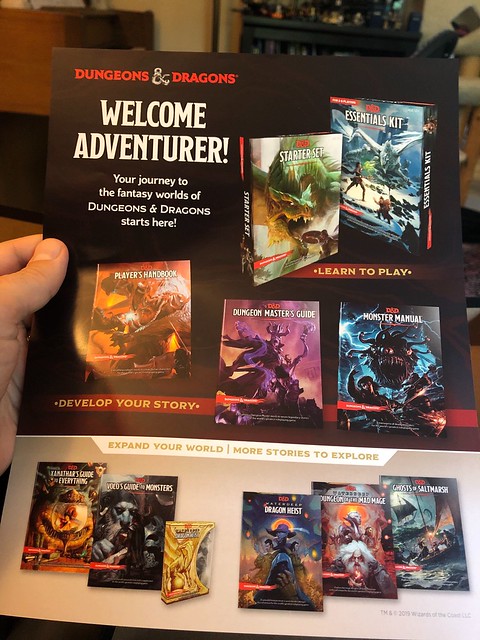 That's right, there's finally a physical/digital crossover, which fans have been begging for on the Beyond forums since their beta. Included with the Essentials Kit are:

That "extra content" link takes you to a landing page that is mostly about getting started playing D&D, with a big "coming soon" blurb on the actual extra content. That's also a mild disappointment, but I'm excited that there is more content coming, and if I were a new player, and not already invested in/hooked on Beyond, I'd be glad to have something addressing the "okay, now what" question and ushering me into the game. It's well executed, and the Beyond folks deserve credit for helping to bridge that gap.

It looks like there are three adventures on the way--one for a seventh-level party, one for ninth-level, and one for an eleventh-level party. It's not clear whether or not these will be exclusive to Beyond, but it seems like there's a good chance of it, given how this insert is all about experimenting to see if a physical-item buyer will convert into an online buyer. And while I have enjoyed the larger "blockbuster" hardbacks from 5E, I have a ton of nostalgia for smaller module-sized adventures from the 80s that could be played in one or two sessions, and I warmly welcome this return to form.

I can't overstate how exciting it is to have the physical and digital realms crossing over here, much the way Marvel has with their comics. This is HUGE, and makes me want to re-buy the PHB this way to demonstrate to them that the hybrid physical/digital model is viable. (Alas, I already own a Legendary Bundle on Beyond so I don't think I can.)

Also included on the back of the advert sheet is a nice section covering "where to go to join the community online" with links for D&D's official Twitter, Facebook, website, YouTube, Twitch, and the DMs Guild marketplace. This is also a huge change from my entrée to D&D, where for my first couple years I played pretty much entirely on my own, with no one in my peer group who was interested in it (or, frankly, capable of it; I only got my Basic Set because I wanted a copy of Dungeon! and my mom bought the wrong thing, and I was probably way, way too young for actual D&D thanks, Mom, you're awesome!).

So, my final verdict/hot take is that everyone involved did a great job with this new version of the starter set. It really looks like a lot of fun, I can't wait to play the new adventure and try out sidekicks, and I'm hopeful that we'll see more physical/digital crossover in the months to come.